It‘s the end of the world as we know it. Everybody with a Y-chromosome dies, except for Yorick and his pet monkey. And so begins his trip to find his lost love. On the way he picks up some travel companions and a lot of trouble—he provokes plenty of that trouble by not being the smartest cookie.

Artwork and plot are ok. The timeline ticking backwards and forwards is a nice gimmick, but got a bit confusing towards the second half of Volume 1.

I would have liked to see more of the early days after disaster struck and of how Yorick deals with his situation. It all seems very orderly and clean, when the story picks up two months later. I would have thought that it is still more chaotic after such a short time. Half of the world‘s population and gazillion of animals just fell over dead in a messy way. The place should stink to heaven and be full of diseases. Lots and lots of things should have stopped working. It should be mayhem…

At the end of Volume 1 I am somewhere between 3 and 4 stars. Onwards to Volume 2, Cycles…

Strabo, Greek historian: “that the right breasts of all Amazons are seared when they are infants, so that they can easily use their right arm for every needed purpose, and especially that of throwing the javelin and use the bow.“ 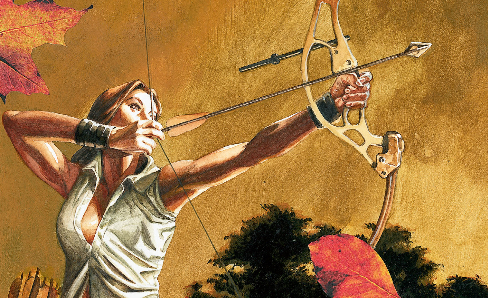 We are either dealing with stupid Amazons or authors that didn‘t do their research.

Anyway, I liked this less than Volume 1. The man-hating Amazons didn‘t work for me, I didn‘t buy the Stockholm Syndrome thing and Yorick was pretty annoying, too. Homophobia. Stereotypes. Clicheed caricatures of women. And, seriously, the world is ending and all he wants is to travel halfway around the globe to find his girlfriend? And what is with the weird Israeli soldiers? And the statistics? And the preachiness? Yeah, not working for me.

One thought on “Too annoying to continue”