The Final Frontier by Neil Clarke
My rating: 4 of 5 stars

I will be reading one story per week. If all goes as planned, there will be updates every Sunday until July…

Wow, that was really depressing! A not-so-far-away, digitally transformed future without civil rights or liberties. A set of condemned criminals (to that system, not ours just yet) preparing for their final voyage. Really, really depressing. But cool as well. Wouldn‘t have minded to find out how they fared after their voyage out.

Part of the White Queen books by the author: https://www.goodreads.com/series/5595…

Also part of this quartet of stories: https://aqueductpress.blogspot.com/20…
The author‘s recap of this particular short story made me laugh. Love the Gruffaloes.

“We approach the wreck in stealth mode: lights and communications array off, sensors on alert for any other working ship in the vicinity.“

„We don’t face water here—we don’t have its weight or its unusual properties, particularly at huge depths. We have other elements to concern us: No gravity, no oxygen, extreme cold.
And greed.“

I love the wreck diving analogy, aka comparison to scuba diving. Greed is a recurring theme in this story. They find something in this wreck. Is it worth the risk?

“The award-winning “Diving into the Wreck” novella marked the first step in a large journey for New York Times bestselling writer Kristine Kathryn Rusch.“
I will certainly look more closely at this author. This was fun to read. Although I find it hard to believe that they haven‘t managed to develop snag-proof fabric that far into the future.

This made me think of The Expanse. Hard hitting, unforgiving space. And Event Horizon. Creepiness in space.

There is a 300+ pages long book by the author by the same name, so I assume this might be a novella that was expanded into said novel. Just a guess.

————
THE DEEPS OF THE SKY, ELIZABETH BEAR, ~12 p., ★★★★☆
“Stormchases’ little skiff skipped and glided across the tropopause, skimming the denser atmosphere of the warm cloud-sea beneath, running before a fierce wind.“

Can be read for free here: https://io9.gizmodo.com/sky-mining-is…
or here: http://clarkesworldmagazine.com/bear_…

————
THREE BODIES AT MITANNI, SETH DICKINSON, ~18 p., ★★½☆☆
The ideas behind the story are interesting. I just didn‘t like the execution. Too abstract, too talkative, too little doing for my taste. But the central theme of the story is something you could debate hotly for hours. Uploaded consciousness, curtailed consciousness, colonization, expansion.

I really liked this. I was immediately deeply immersed in the story and identified with Lizzie from the first moment. Great, vivid descriptions of Titan. Loved the concept and have to leave it at that, as I don‘t want to give anything away. The ending felt a little abrupt.

In this case we have a similar topic with a different premise—uploaded consciousness… And how we communicate with each other. What makes us tick, what causes us to behave differently, where do we divert from the path and why. The story was well told with a great plot twist that caught me by surprise. Sad and bittersweet ending.

The beginning sounded pretty exciting. Pilot with body modifications (gills!!!), merged to his ship. Assuming that Mona is his ship… There are hints to pilot-ship personal dynamics that are not really elaborated upon. The romance/personal relationship wasn‘t really there. The story was ok, but it didn’t explore anything deep enough or to a satisfying level.

“At the end of the cable hangs the heart of the Hopeful, the habitat module, a five-hundred-meter-tall cylinder into which all the 1,021 inhabitants of the world are packed.“

It‘s the end of the world as we know it and the survivors are on a generation ship. This story is about how they got there and what happens next.

Wow, beautiful story. I cried. The story is very much about the needs of the many, the few and the one. Fascinating, Mr. Spock! What makes a hero? A great look at the differing views of East and West, a holistic understanding of the world and the many, juxtaposed to that one hero.

Story can be read for free here: http://www.lightspeedmagazine.com/fic…

————
A JAR OF GOODWILL, TOBIAS S. BUCKELL, ~ 24 p., ★★★★☆
“You keep a low profile when you’re in oxygen debt.“
A world where aliens have patented pretty much everything. Think Monsanto in space. Great imagery. I would like to find out more about this world and its inhabitants. A short story with potential for more. I am intrigued by the Compact and the concept of Friends. I wouldn‘t mind to read more stories set in this world or by the author.

The story can be read for free on Clarkesworld where it was published originally: http://clarkesworldmagazine.com/bucke…

I just found this info online:
“As of September 2011, Buckell is working on a stand-alone novel titled Infringement, adapted from his short story “A Jar of Goodwill,” which was originally published in Clarkesworld. The novel will be published by Tor, sometime after the independent release of Apocalypse Ocean.“

I looked around and could not find a book by this name, so I guess he hasn‘t written it yet.

A Haunted House. Or rather a house with doors leading to parallel universes. Lovely ending, but generally not my kind of thing.

Can be read for free here: https://uncannymagazine.com/article/a…
Author‘s website: https://atgreenblatt.com

The Ends of the World: Volcanic Apocalypses, Lethal Oceans, and Our Quest to Understand Earth’s Past Mass Extinctions by Peter Brannen
My rating: 3 of 5 stars

The book has enjoyable stretches, but in total was really too boring to keep my interest. Strange, really, considering that I am interested in paleontology, love to watch documentaries about Earth‘s history—volcanos, movement of tectonic plates, various critters, etc.— and frequently read about climate change and sustainability topics.

Not sure if it‘s me or the book. I sometimes disliked the flip tone of the narrator. And the book was a little to centered on the US to really appeal to me. On the other hand I learned something about the geological history of the North American continent.

I think one issue I have is that it‘s not clear to me what the book wants to be. A kind of travelogue with anecdotal stories about geological and paleontological history or rather light pop-science, priming us on the reasons and consequences of climate change. Neither works well enough.

At times informative and lightly entertaining, sometimes humourous, depressing and boring for long stretches. The required doomsday scenario at the end with a pinch of hope.

Having a Wolverine moment… 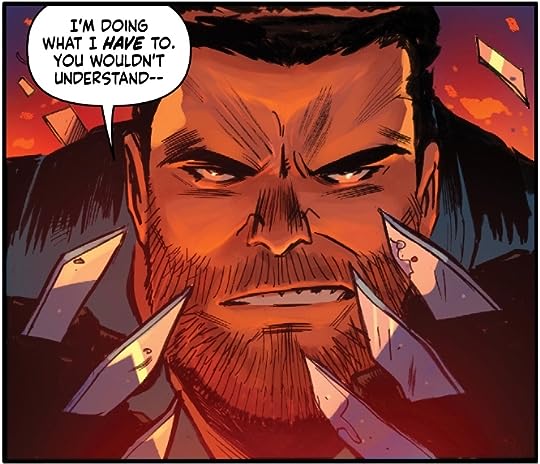 Excellent finish with a nice little twist. Now waiting for volume 3 and the next story arc…

Skyward #9 by Joe Henderson
My rating: 4 of 5 stars

The weakest one so far. Still very good, but slightly afflicted with the in-between-syndrome.

Skyward #8 by Joe Henderson
My rating: 5 of 5 stars 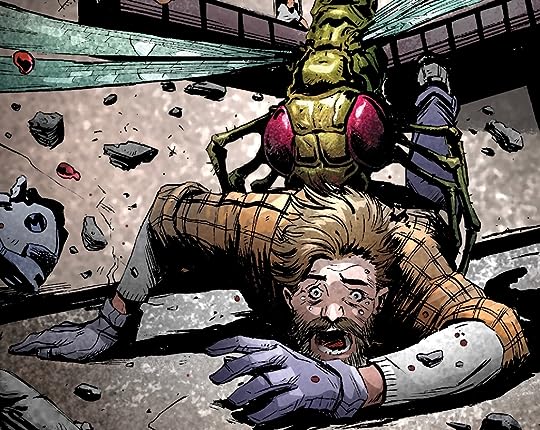 I like Edison. A little mystery and tension. And…. SURPRISE!

Skyward #7 by Joe Henderson
My rating: 5 of 5 stars

No-brainer, she has to save that girl‘s daddy! 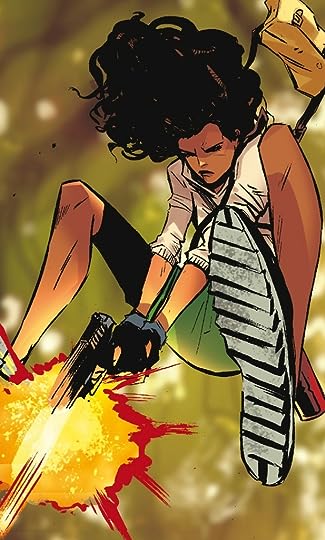 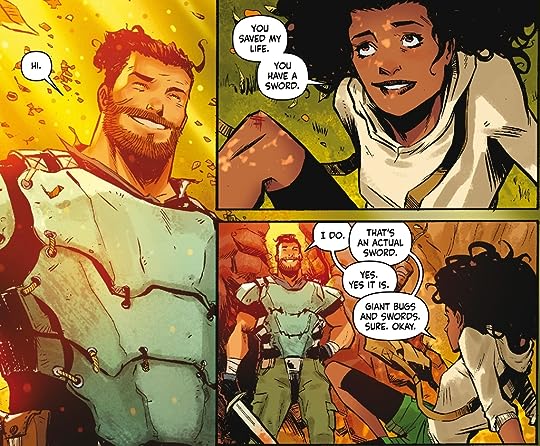 Skyward #6 by Joe Henderson
My rating: 5 of 5 stars

Nice start to the new story arc. Still love the artwork and colouring. Looking forward to Willa‘s adventures outside of the city. Bugs! 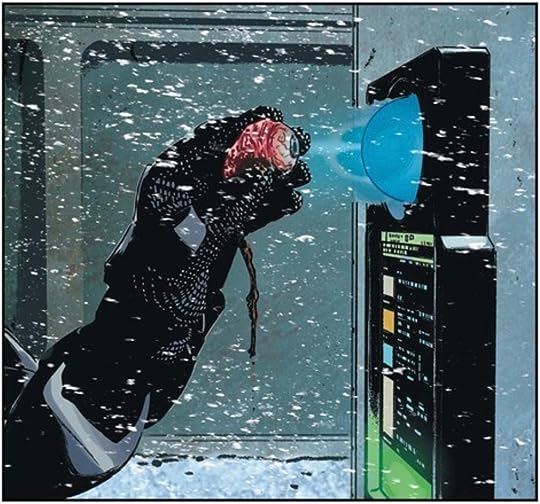 The story was ok. A lot of set-up. I expected more, especially after the two part prelude with you-know-who…

Great last page! Bold! But a really mean place to interrupt the story. And the whole thing is too short! Perhaps I have to get used to the new format… I still don‘t trust Johanna. ★★★★☆

The RPG stuff at the end was fun. And the letters. Especially the answer to the last one. ★★★★★

The science bit was mostly depressing. Humans on Mars in my lifetime. Hopefully not just as an escape plan. ★★★★☆

Now we wait for July, for the next Quarterly! Nice cover page!

———————
Pre-read review:
Looking forward to this a lot! There is a two-part prelude, Lazarus #27 and #28, which might be best read beforehand. If I got my numbering right, this one here would be #29 in the allover series.

Review for The Secret Lives of the Nine Negro Teeth of George Washington by Phenderson Djèlí Clark, 3636 words, ~8 pages, ★★★★★

I love the casual mix of supernatural elements into the story. Imaginative and well written. Not quite a ghost story, not quite historical fiction.

Can be read for free here: https://firesidefiction.com/the-secre…

Beautiful artwork at Fireside Magazine, where the story was originally published: 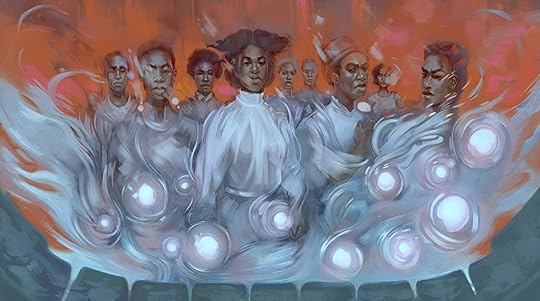 Reviews of books to suit every budget and the new home of Goodreads Monday!