Watchmen by Alan Moore
My rating: 2 of 5 stars

Wild colour scheme! So what do we have here? Drop from a high building? Was he pushed? Murder? Burglary? Who knows! 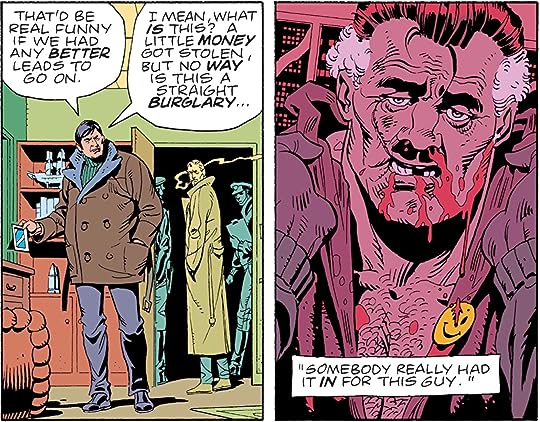 It‘s colourful. Weirdly so. People are unlikeable and mostly nasty. Rorschach is despicable.
A murder mystery with forcefully retired superheroes?

So far it‘s all set-up of some nasty and despicable people without any redeeming features. I don‘t know why I should care.

I get the general direction of the story and I vaguely like the idea of a story within a story and the various hints and glimpses of half hidden things here and there, still… after finishing chapter three I feel no great interest in continuing this graphic novel.

Well, ok, Dr. Manhattan‘s story, the various timeline, his fluid perception thereof, the story of Jon and Janey and the accident — that was pretty good. 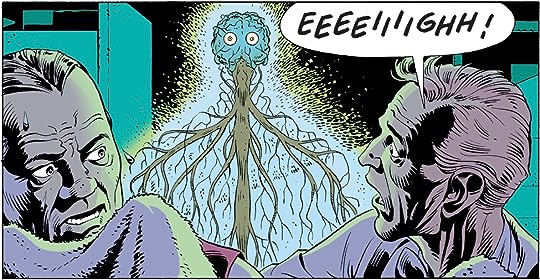 The ending of that chapter leaves things wide open — at least a reason to continue now.

P.S.: I am not reading the full text parts at the end of each chapter.

It’s night. There is an intruder downstairs in your house. You get your gun, go downstairs and the first place you check… 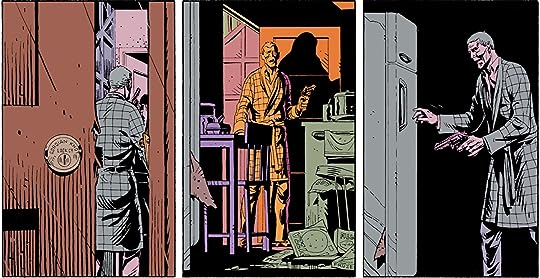 …is inside your fridge???

The colours are eye-watering on ocassion. I wonder what the point is of the sub-story with the ship-wrecked sailor? Should I have recognized Rorschach without his mask? Well, I didn‘t. The story was ok-ish.

Ok, wasn‘t supposed to recognize Rorschach without the mask, I think. Here is his backstory. Depressing, unsettling stuff.

Nite Owl and Laurie, some Rorschach, pretty much lost interest… skimming… Dr. Manhatten appears and we see some watchmen whose name I forgot.

This is not for me. Half of this thing is backstory and build-up, the colours are garish, the characters are horrible people. Yes, smart, lots of hints and clues and… whatever! How many more boring chapters are there?

I realize that this is considered an iconic and groundbreaking graphic novel, but I am just not entertained. I need someone I can identify with, not just a bunch of callous people without humour or a moral compass. Plus, did I mention the garish colours?

Ok, Jon is mildly entertaining and sometimes something comes along that is almost pretty in a Moebius kind of way… who was earlier and proves that there was truly iconic and groundbreaking stuff before this… 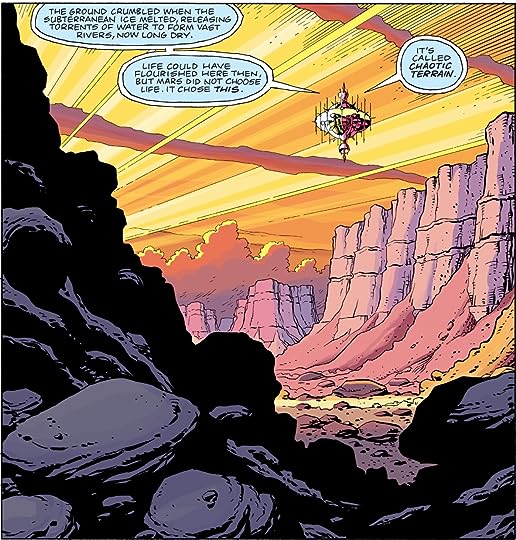 Obviously, as soon as I start bitching about this, something interesting happens and I come across some good panels. Great ending to chapter 9.

I am basically mostly skimming at this point, reading bits here and there. So, am I being set-up or is the really bad guy who they are insinuating? (view spoiler)[I mean the dude in the golden outfit with the cat-thing… (hide spoiler)]

The Davidstown storyline is not bad.

And I am skimming. Bam, disaster strikes… Yep, that‘s what I thought. Could‘ve only been him..

Yikes! Pretty bad in a very Technicolor way… or not…?

Thank goodness, I skimmed my way to the end. Yes, I missed a lot by doing that, but I lost interest. This did not do it for me. Great stuff, if you like it, I am sure.

I might have a look at this for enlightenment at some point:
…don‘t spoil yourself! You have been warned…