The Complete Okko by Hub
My rating: 4 of 5 stars

Okko the ronin heads a small group of demon hunters… Noburo, a mysterious giant who hides his face behind a red oni mask, and the whimsical monk Noshin, the saké lover with the power to summon and commune with the spirits of nature.

The young fisherman Tikku enlists the group’s help in finding his sister, the geisha Little Carp, who was kidnapped by pirates… 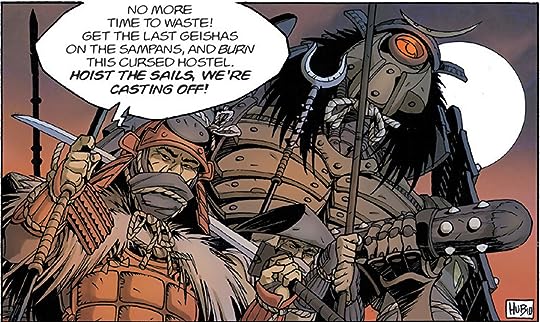 Pretty cool. The beginning was confusing, but the plot developed quite nicely and I like the very colourful artwork. I was satisfied with the story, including the cliffhanger.

At the end, Tikku joins Okko, Noburo and Noshin on their travels, to hunt (their personal) demons…

I wonder, what Noburo hides under that mask? 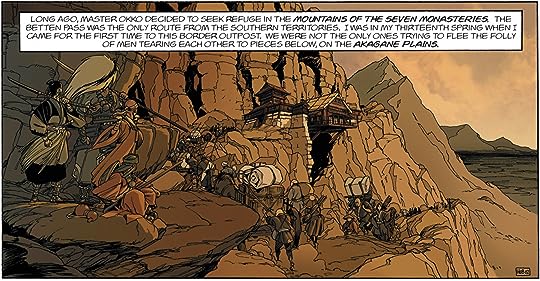 The story telling is too wordy and the artwork is sometimes really tiny. I lost interest in the story towards the end. The bad guys were nicely evil, but it was all a bit pointless.

Ok, that was not confusing at all….

The boys are not having a good time. Appendages are lost. Ropes are tied. Hm. The plot was good. Nice action, some mystery, some humour, something shocking. Not sure I really got the ending. Why so happy?

Ok. Not sure if it was me or if that story was a little allover the place?

Continuation of the previous issue. The art is still nice, the changing POVs do not make it easy to keep track of what is going on. The Cycle of Fire is basically a major conspiracy story. Smartly done actually, once you figure it out.

Backstory! Interesting! And as in the previous issues quite a bit of gratuitous violence.

Finally done. Hm. There was closure to it all, the loose ends were tied up. The artwork was good. Unfortunately the characters were pretty unlikeable and the main character Okko was a pretty horrible person. Did he really want or find redemption? Not sure. What am I to make of that last panel showing his face?

Brimstone and Marmalade by Aaron Corwin
My rating: 5 of 5 stars

Mathilde didn’t want a demon. She wanted a pony.
“Ponies are expensive,” Mathilde’s mother said. “How about a nice little demon instead?”

Very cute, delightful little story. A little sad. Middle Grade, apparently? About what we want and the surprising things that can happen when we do not get what we thought we wanted.

Now I want a little demon, too! Happy Halloween!

Triad Soul by Nathan Burgoine
My rating: 2 of 5 stars

„Luc, Anders, and Curtis—vampire, demon, and wizard—sidestepped tradition by binding themselves together.“
Without this sentence in the book synopsis I would have been completely lost. Even with it I struggled to keep the characters and names straight.

Minimal to no set-up or world building. All the characters felt the same. The magic kept reminding me of other UF or PNR I have read. Same old, same old, read this many, many times over.

Everybody else seems to like this, but it is not for me, DNF at 24%, 2 not very sparkly stars.

In a galaxy far, far away I received this free e-copy from the publisher/author via NetGalley, in exchange for an honest review, thank you! Sorry that it took me so long. Too many books, too little time. I will try to do better.

Dragon Blood by Eileen Wilks
My rating: 2 of 5 stars

Best read back to back with the previous book. Avoids frustration at the end of that one, due to the massive cliffhanger, aka it stopped practically in the middle of a chapter. Some heavy editing of this one here with some massive cuts and publishing those two books in one might have been the way to go…

The book starts with immediate action (middle of the chapter, remember?), followed by a veeery looong info dump. 70 pages in, I starting skimming just a teeny-weeny bit. 100 pages later I was still knee-deep in explanations, more explanations, details upon details, portals, gates, Dis, Hell, magical philosophy, snore, skim skim skim…. And more skimming. Oh boy, this really did not do it for me. Large parts of the plot just felt like boring attempts to rack up the page count. Jumping here, jumping there, more detailed explanations, pages after pages of… I don’t even know, because I was skimming so much! The only highlight was Grandmother.

What the heck was that? Possibly the end of me reading this series. 2 catatonic stars, whimpering away, possibly through a gate into another dimension, that might or might not have a congruent timeline. I wish I had a gate to go through, back to the time before I started this book!