iZombie, Vol. 2: uVampire by Chris Roberson
My rating: 3 of 5 stars

We start off with Scott, telling us how he met the girls at the café for the first time. He is such a nerd! 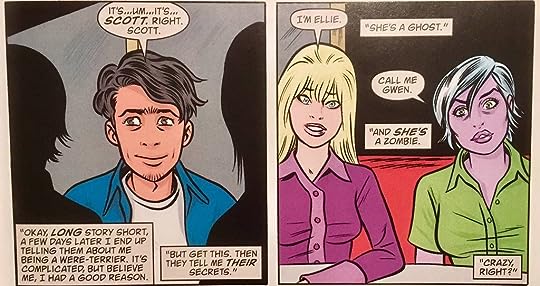 I did like to find out more about Scott. But generally I expected more vampires in this, considering the name of the volume.

A lot of build-up and many plot bunnies, but none of the storylines went anywhere conclusive in this volume. Very much a filler, that fleshes out some background.

It was ok, art and colouring are nice, but it doesn‘t inspire me to find and buy the next volume. I might like the TV adaptation just a little bit more after this.

Summerland by Hannu Rajaniemi
My rating: 5 of 5 stars

„You are a cruel woman, Mrs. Moore,“ he said between sips.
Reminiscent of Marvel‘s Agent Carter, Mrs. Moore is a secret agent… but that is just the beginning. Set in 1938, we get espionage and counter espionage, glimpses of the Spanish Civil War, the Old Boy‘s Clubs ruling Great Britain, one disenchanted female agent, communism, an alternate reality or rather, a netherworld of ghosts and mediums. Because in this world you go places, when you die. If you have something important to do and own a Ticket…

A little confusing at first, pretty good world building from the start. I had to refreshen my lacking knowledge of the Spanish Civil War, which was a lot of fun in itself.

Real spies and double-agents added extra interest to the story. And a whole bunch of other characters from real life, fitted into this ingenious world. I had a lot of fun looking up all of them.

Is the Zöllner camera based on Johann Karl Friedrich Zöllner? Herbert Blanco West took me a bit to figure out… Very educating read, besides being entertaining.

Good pacing, suspenseful, not too predictable, well developed characters. I had a hard time picking sides, because I liked pretty much all of them. And in the end you do not (only) get the expected, which makes it fun. I would pick up a sequel, if there will be one. But this is fine as a stand-alone.

I received this free e-copy from Tor/Forge via NetGalley, in exchange for an honest review, thank you!

Mrs. Zant and the Ghost by Wilkie Collins
My rating: 3 of 5 stars

A classic Victorian ghost story, first published in 1885, which I got as an Audible freebie. Narrated by Gillian Anderson (X-Files).

I found it to be a pretty dull ghost story, with the stereotypical gender roles of the time.

Gillian Anderson’s narration was a bit breathy for my taste and the different characters were not terribly distinct and pretty much in the same register, regardless of situation.

It was short, it was free, it was ok.

Silence Fallen by Patricia Briggs
My rating: 5 of 5 stars

“I’m a mechanic; I fix things that are broken. I turn into a thirty-five-pound coyote. I have powerful friends. But when it comes right down to it, my real superpower is chaos.”

Changing points of view, that’s a new one for this series! I liked it, although I am not quite sure about the off-set timeline. It added an interesting dynamic, but probably made it unnecessarily complicated.

Nice revelation there at the end, makes me want to re-read the whole damn book right away… I missed all the clues, if there were any.

Some great character additions. Libor was fun. Lots of vampire politics, which I usually find tedious, but they were well done here. Great visuals, good plot, entertaining, three very late nights of not wanting to put this down…