The Cavern by Alister Hodge
My rating: 5 of 5 stars

No messing around in this book. Slow build-up? Pffft! It‘s B-Movie Horror Flick Night! Body count of the epilogue: 2:0 for the monster. And it keeps going. It‘s bloody, there is gore, there is a lot of action, suspense, oh-shit-moments and it‘s a lot of fun. It is well written to boot and the characters actually have personalities.

It‘s a little predictable, but that‘s to be expected with a creature feature fest like this.

If you are in the mood for uncomplicated monster fun with plenty of blood splatter—this is a pretty damn good choice! Oh yes, and I multiplied my knowledge of Aussie slang by a lot!

Recommended! 4.5 stars. Thank you, Dennis, for pointing me towards this particular cave system!

Maelstrom by Peter Watts
My rating: 3 of 5 stars

The sequel to the first Rifters novel, Starfish. Difficult. Lenie Clarke comes to shore and with her the apocalypse, of a sort (two sorts, actually).

The first half of the book was confusing. Multiple viewpoints with different agendas, some of them of the artificial kind. I was pretty lost. Cyberpunk meets the apocalypse meets a revenge story and…. it was a mess. I skimmed some of the more indecipherable parts. I contemplated to DNF, but my curiosity kept me going. It was a case of „what the hell did I just read“, but it had its moments.

A plot finally coalesced about two-thirds into the book and it was pretty slim. This book is more about the noise than about the red thread. The ending was satisfying enough. I might even pick up the third book at some point.

Need a laugh and an overdose of cute? Feel good children‘s book for shark-lovers.

This is the cutest shark ever. A little lesson about judging a book by its cover. Don‘t believe everything you‘re told. And it‘s also a little bit about not giving up. Sometimes it takes a little work to make friends.

Rolling in the Deep by Mira Grant
My rating: 4 of 5 stars

I liked Into the Drowning Deep, so it was a given that I had to read this eventually.

Popcorn horror. The cast of characters is not too stupid, the gore is nicely gory. The plotting is a bit unbalanced. It takes forever to get to the blood letting and then it is over in the blink of an eye. Still, the 128 pages flew by quickly. Nicely done.

MEG: Primal Waters by Steve Alten
My rating: 2 of 5 stars

Monster pulp fiction had a love child with a National Geographic documentary. Shark Week! It‘s like a really horrible train wreck—I haven‘t been able to look away for the third book in a row now.

Immature characters. Stupid, stupid people. Not passing the Bechdel test. If you are sensitive to that, don‘t touch this book. Oh, and add some fat shaming as well.

Anyway… If you can get past that without ripping the book into teeny, weeny pieces in frustration and exasperation, it‘s pretty fun to read about the ways stupid humans can get eaten by sharks. If I counted right, Megalodon won 17 to nil.

The only character that feels a little like a real person is Jonas Taylor. It probably helps that every time he shows up on page, my hind brain goes „Jason Staham! Yay!“

Prologue and first chapter are mostly recap of the previous two books, with minimal set-up, plus some repetitive and not very exciting info dumps. In the beginning less telling, more showing would have been good. The Daredevil sequences are not all bad. Then there is a good scene in between with David and Mac stuck in the lagoon on a sinking ship. As the action ramps up towards the end of the book, it is indeed fun to read this.

Still, lots of issues with the characters. I can‘t in good conscience give this more than 2 stars… well, maybe ★★½…

Will I read the fourth book? Goodness, it‘s a possibility. But not for a good, long while… There have to be shark/underwater horror books that are written better than this? I am open for suggestions!

As a teenager I read a ton of Alan Dean Foster. Almost all of the Humanx books and then some. Pip and Flinx stayed in my memory, the Icerigger books, a book that I can‘t remember the title of and can‘t find and this… I have an obsession with books set underwater anyway. So, a few decades later I decided to read some of them again, to see if I still like them.

Well, I just finished this. I realized two things—I remembered almost nothing of this book and what I thought I remembered didn‘t happen. So either I made it up or I was thinking of (yet) another book. Sigh.

So, how was it? Well, the language felt a little dated. But the book is almost 40 years old, so that is ok. The daughter was hugely annoying, her musical instrument was pretty interesting, sadly not really explored and pretty obviously a tool. The outcome felt morally pretty suspect and… oh well, it was ok.

Starfish by Peter Watts
My rating: 5 of 5 stars

I am a sucker for books set underwater. So keep the recommendations coming!

When this one was recommended to me quite a while ago, I was hesitant. It sounded pretty strange, potentially filled with really unlikeable and twisted characters. Well, they were, mostly. But the supposedly healthy and normal people topside were not necessarily a lot saner or nicer in the long run.

I ended up liking this quite a lot and I already downloaded the sequel. Kudos, Peter Watts! So, the book…

Welcome to Beebe Station.
You’re three kilometers below the surface of the Pacific Ocean.  You’re perched on the shoulder of an active volcano. The local fauna is very large and very nasty.  If it doesn’t kill you,  a mudslide or an erupting smoker probably will.

Your fellow employees are rapists, pedophiles, borderline psychotics, and victims of same.

You feel very lucky to be here.

This is a damn sight better than the life you left behind.

Nice introduction in the prelude. Makes you anxious for whoever is going to end up living down there.

Chapter 1 gives us a tour of black smokers, gulper eels and other weird deep sea fish… 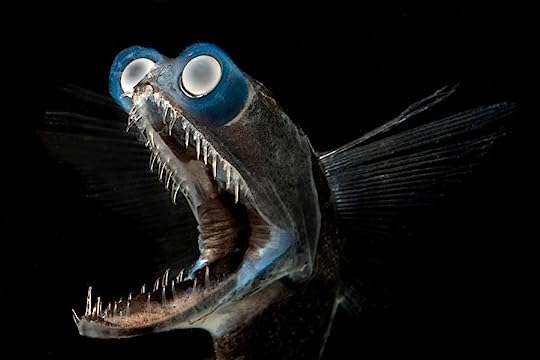 Our main character, Lenie, is as odd as expected. Not quite sure how things work with other people. Afraid to go outside at first. But by chapter 2 already more comfortable out there in the dark than inside the station, with another person.

While I read the opening chapters, the soundtrack of Jaws was playing in an endless loop, by the way…

In part two we met all of Lenie‘s weird and dysfunctional colleagues. Things got stranger and tenser. And stranger still in the following parts. But somehow these pretty horrible characters started to grow on me.

I ended up rooting for the rapists, pedophiles, borderline psychotics, and victims of same. I guess you will either like this book a lot or hate it fiercely.

The reference books mentioned at the beginning sound really interesting. I was tempted to look up some of his sources, but the likelihood that I would actually read any of these books is slim.

Here is an old and partly defunct website for the book, I would suggest reading it after you‘ve read Starfish, as it gives away some background information:
http://www.rifters.com/starfish/s_mai…